"Many Animals Can Count, Some Better Than You"

Work by our very own Dr. Rochel Gelman, Dr. C. Randy Gallistel, and former student Dr. Jennifer Jacobs Danan was included in a report on animal counting published in the the New York Times on Feb 5, 2018.

"Human scent is on par with animals, Rutgers professor reports"

Dr. McGann's research was featured on first page of the Daily Targum on Feb 1, 2018.

In his lab, Dr. McGann works with rodents in an attempt to understand the biological systems behind the sense of smell and how the brain differentiates and adapts to different odors, he said. His study centers around the olfactory bulb, an organ located in the front of the brain, that plays a major role in an animal's ability to smell. 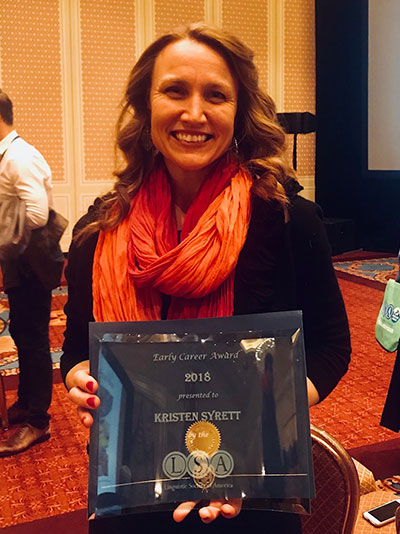 We are excited to announce that the Linguistic Society of America has chosen Dr. Kristen Syrett as the recipient of their Early Career Award. Instituted in 2010, this award recognizes scholars early in their career who have made outstanding contributions to the field of linguistics.

Why do so many Americans disapprove of atheists?

These are some of the questions Professor Julien Musolino poses in “The Religious Mind,” a psychology course in the School of Arts and Sciences that draws nearly 200 students, filling a large stadium-style lecture hall in the Rutgers Academic Building.

Graduate students at Rutgers University protested on Wednesday, their lives and academic futures clouded by uncertainty. They claim the tax reform bill proposed by House Republicans would strip out special waivers they count on to survive financially.

“This seems almost counterproductive because the tax bill would make it more difficult for grad students to stay in grad school because they won’t be able to afford to be here,” said graduate student Dee Payton.

“It would just make everything very difficult. A lot of my colleagues would drop out,” graduate student Morgan Moyer said.

Moyer’s pursuing a degree in linguistics and cognitive science. She’s one of about 145,000 grad students nationwide ...