Videos footage from RuCCS Colloquium Talks can be found on the RuCCS YouTube Channel. For all other events, please check the sponsor's website for more detail.

Copy to My Calendar (iCal) 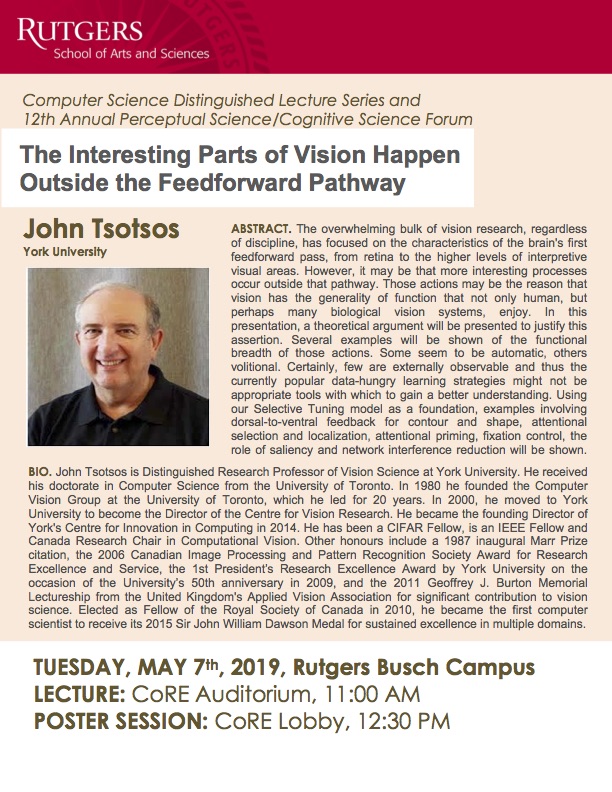 LECTURE (11am): "The Interesting Parts of Vision Happen Outside the Feedforward Pathway", John Tsotsos, York University

ABSTRACT. The overwhelming bulk of vision research, regardless of discipline, has focused on the characteristics of the brain's first feedforward pass, from retina to the higher levels of interpretive visual areas. However, it may be that more interesting processes occur outside that pathway. Those actions may be the reason that vision has the generality of function that not only human, but perhaps many biological vision systems, enjoy. In this presentation, a theoretical argument will be presented to justify this assertion. Several examples will be shown of the functional breadth of those actions. Some seem to be automatic, others volitional. Certainly, few are externally observable and thus the currently popular data-hungry learning strategies might not be appropriate tools with which to gain a better understanding. Using our Selective Tuning model as a foundation, examples involving dorsal-to-ventral feedback for contour and shape, attentional selection and localization, attentional priming, fixation control, the role of saliency and network interference reduction will be shown.

BIO. John Tsotsos is Distinguished Research Professor of Vision Science at York University. He received his doctorate in Computer Science from the University of Toronto. In 1980 he founded the Computer Vision Group at the University of Toronto, which he led for 20 years. In 2000, he moved to York University to become the Director of the Centre for Vision Research. He became the founding Director of York's Centre for Innovation in Computing in 2014. He has been a CIFAR Fellow, is an IEEE Fellow and Canada Research Chair in Computational Vision. Other honours include a 1987 inaugural Marr Prize citation, the 2006 Canadian Image Processing and Pattern Recognition Society Award for Research Excellence and Service, the 1st President’s Research Excellence Award by York University on the occasion of the University’s 50th anniversary in 2009, and the 2011 Geoffrey J. Burton Memorial Lectureship from the United Kingdom's Applied Vision Association for significant contribution to vision science. Elected as Fellow of the Royal Society of Canada in 2010, he became the first computer scientist to receive its 2015 Sir John William Dawson Medal for sustained excellence in multiple domains.

Visitor parking is available in Lots 64, 60A & 60B by registering your vehicle following this link. Please register prior to the event in order to avoid a citation.

Faculty, Staff, and Students must park only in lots they are authorized to park in.