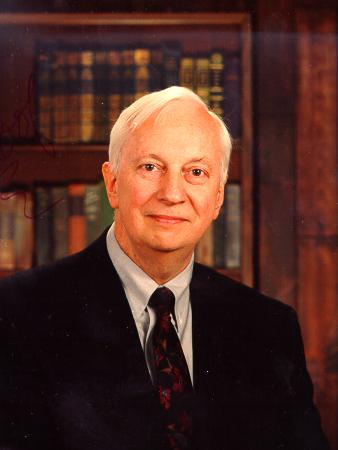 [Note: replace " at " with "@" -- this is to frustrate spammers who get their email addresses by automatic web-page scanning]

If you are browsing at this site you may also be interested in a talk I recently dug out. As president of the Cognitive Science Society in 1986 I was asked to inaugurate the tradition of after dinner Presidential Addresses. The talk I gave was partly a serious plea for a certain view of the field of Cognitive Science I felt had led to the creating of the Society, and partly it was stand-up comedy, aided by a variety of cartoons purloined from the New Yorker and from Gary Larsen. Since that time I keep running into people at parties who remember me, not for the brilliant research I have done, but for the talk. I have even had people perform some of it better that I could have done!

If you are interested in the talk you can access it here, but I would urge you to click on the cartoons and other visual aids only after they have been introduced in the talk.
Click here for the talk Spring and Fashions in Cognitive Science.

Zenon Pylyshyn received a B.Eng. in Engineering-Physics from McGill University, an M.Sc. in Control Systems from the University of Saskatchewan, and a Ph.D. in Experimental Psychology from the University of Saskatchewan for research involving the application of information theory to studies of human short-term memory.  Following his Ph.D. he spent two years as a Canada Council Senior fellow and then joined the faculty at the University of Western Ontario in London, where he remained until 1994 as Professor of Psychology and of Computer Science, as well as honorary professor in the departments of Philosophy and Electrical Engineering and Director of the UWO Center for Cognitive Science. In 1994 Pylyshyn joined the faculty of Rutgers University as Board of Governors Professor of Cognitive Science and Director of the Rutgers Center for Cognitive Science.

Pylyshyn is recipient of numerous fellowships and awards.  He was awarded the Donald O. Hebb Award from the Canadian Psychological Association in June 1990, “for distinguished contributions to psychology as a science”.  He is a fellow if the Canadian Psychological Association and the American Association for Artificial Intelligence.  He has  been a Killam Fellow, a fellow of the Center for Advanced Study in the Behavioral Sciences at Stanford, a fellow at the MIT Center for Cognitive Science and a fellow of the Canadian Institute for Advanced Research (CIAR).  In 1998 he was elected Fellow of the Royal Society of Canada. In 2004 he was awarded the Jean Nicod Prize in Paris and delivered the Jean Nicod lectures. He is past president of two international societies: the Society for Philosophy and Psychology, and the Cognitive Science Society.  For 9 years (1985-1994) he was national director of the Program in Artificial Intelligence and Robotics of the Canadian Institute for Advanced Research.  He is on the editorial boards of eight scientific journals and has been on several industrial or academic scientific advisory boards.

Pylyshyn has published well over 100 scientific articles and book chapters, including a paper designated as a Science Citation Classic ("What the Mind's Eye Tells the Mind's Brain", Psychological Bulletin, 1973) and has given over 200 talks and keynote addresses. He is author of Things and Places: How the Mind Connects with the World (Jean Nicod Lectures Series, MIT Press, 2007), Seeing and Visualizing: It's not what you think (MIT Press, 2004) [Winner of the Association of American Publishers Professional/Scholarly Publishing Division Annual Awards competition], Computation and Cognition: Toward a Foundation for Cognitive Science (MIT Press, 1984), as well as contributor/editor of five books, including: Perspectives on the Computer Revolution (1988); Computational Processes in Human Vision: An Interdisciplinary Perspective (1988), The Robot's Dilemma: The Frame Problem in Artificial Intelligence (1987), Meaning and Cognitive Structure: Issues in the Computational Theory of Mind (1986), and The Robot's Dilemma Revisited (1996).  As chairman of an NSF-sponsored panel on artificial intelligence, Pylyshyn also helped to produce a major survey of the state-of-the-art in artificial intelligence which appeared as part of the book What Can be Automated? (1980).

For the past fifteen years, Pylyshyn's personal research has dealt with two general areas. One is the theoretical analysis of the nature of the human cognitive system that enables humans to perceive the world, as well as to reason and imagine. This has led to a number of theoretical investigations of the "architecture of the mind".  On the experimental side Pylyshyn has been concerned with exploring his Visual Indexing Theory (sometimes called the FINST theory), dealing with how human visual attention is allocated and how humans cognize objects and space. This theory hypothesizes a preconceptual mechanism by which objects in a visual scene can be individuated, tracked, and directly (or demonstratively) referred to by cognitive processes prior to their properties being encoded.  Over a dozen papers have been published on this theory and its experimental investigation, as well as its implications for understanding how vision is connected with the world, making perceptual-motor coordination possible.  The theory has implications for philosophical issues concerning the semantics of visual perception as well as practical applications for the design of human-computer interfaces.